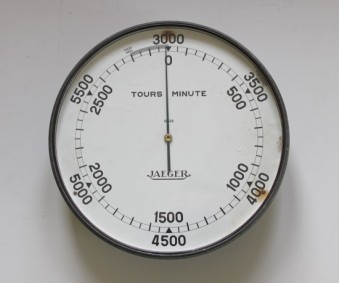 A fine large dial (7”) Jaeger chronometric tachometer - the mechanism
reading twice around the dial to 5,900 rpm.

A rare instrument, originally used for large capacity aero engines during
the glory period of hydroplane racing.
From the early 1920’s hydroplane boats were fitted with ex - WW1 aero
engines in the quest to achieve ever faster speeds on water.
Towards the 1930’s even bigger aero engines were used including
Hispano Suiza, Rolls Royce & Packard.

The instrument is in excellent original condition with clear white dial
and undamaged glass. There are some small rust stains to the dial.

The fine Jaeger chronometric mechanism "ticks" when carefully
spun up with pointer moving and returning to zero.
It has not been fully tested so is sold as operational, with
a recommendation that it is serviced prior to use.

This rare tachometer would also be suitable for a sports / racing car
of the period, due to the higher rev range.