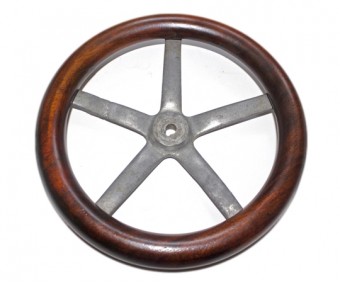 Control systems from the dawn of aviation had not yet been standardised. The control 'stick'
that was later to become the norm was not yet understood. 'Wheels' were initially used to alter
the control surfaces to make directonal changes during flight.

This fine example is in sympathetically restored condition. The center metal section has been
carefully conserved to retain its originality and patina, the mahogany rim wax polished to
enhance the deep colour attained over a hundred years.

Control wheels from this period are extremely difficult to source, and therefore highly collectable.