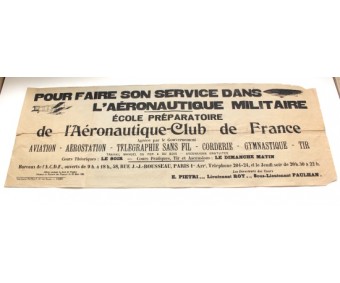 “To Train For Service In The French Military Aviation Section”

One of the first recruitment posters advertising for
pilots to join and train in the newly formed Aviation
Section of the military. Interestingly this was three months
before Louis Bleriot made his historical channel crossing.

France was very much at the forefront of early aviation
design and development – the military realising its potential
from the early stages.

The poster is in overall good original condition for age with
slight damage to corners, it has been previously folded.