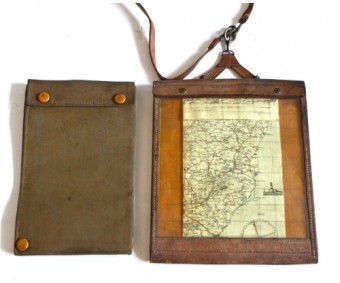 G.W.R. Fane joind the Royal Naval Air Service in July 1915 and gained his 'ticket' after a remarkable three and a half hours.
He was first stationed at Great Yarmouth and soon noted in his log that he had been on several anti - Zeppelin patrols.
Fane was aloft in June 1917 and witnessed Zeppelin L48 being shot down in flames over Theberton, Suffolk.
His most famous encounter was with Zeppelin L21 - having climbed to reach the airship near Gt Yarmouth he started to fire
his machine gun into the underside of the envelope, much to his frustration the gun jammed after expelling one round - the mechanism having frozen.
Flight Lieutenant Cadbury was successful in igniting the airship from the rear, but Flight Sub - Lieutenant Pulling who was
also involved in the raid claimed the victory. The Zeppelin finally crashing into the sea nine miles east of Lowestoft.

The two flying maps are still contained in their original cases - one leather and one canvas.
The canvas case supplied by Sifton Praed & Co. The Map House, 67 St Jame's St - London. The leather case is by John Pound & Co - dated 1915.

Both maps ( Ordanance Survey ) are dated March, 1916. The first ( Sheet 13, Air Packet No. 25 ) Covers coastal Suffolk
from Lowestoft to the north, Harwich to the South, and East as far as Bury St Edmunds.
The second ( Sheet 16, Air Packet No. 25 ) covers coastal Essex from Walton-On-The Naze to the North and Ramsgate
to the South, with Chelmsford and Chatham to the East.

The maps are in good condition for their age, with some light staining, and reaction with the clear celluloid.
There is one small split on the rear section of celluloid.
Both outer cases are in similar original condition. The leather case having his name faintly written in black ink.

During the date period of the maps he was stationed at Burgh Castle, near Gt. Yarmouth.

Fane is very well documented - research material including a 1981 magazine article, details from several Zeppelin books
& correspondence I had with (his second wife) discussing the maps will be included.
Interestingly she was still alive up until a few years ago, having married G.W. Fane as a young woman
during his latter years.

Please contact if you require (larger) images of the maps and cases.