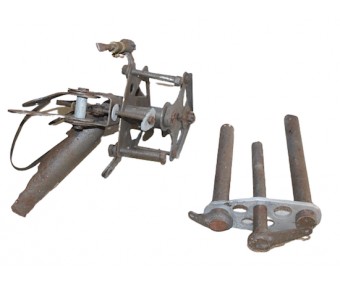 Recovered during the late 1990's from RAF Hawkinge during redevelopment for housing.

The Handley Page Heyford was a twin-engine heavy biplane bomber, operated by the
RAF from 1933 to early 1940.
A large cumbersome aircraft that never entered active service, although pilots & crew
remarked that it was unusually good to fly and operate.
Heyford's used Rolls Royce Kestral engines with the final variants operating
695hp Kestral VI units.

Only 125 Heyford aircraft were built - none have survived. Very few parts remain in museums,
making these pieces highly sought after.

This particular aircraft was forced to crash land at Hawkinge after developing flight
issues. It caught fire and was subsequently broken up, with the main fire damaged
structure buried in a pond on the fringes of the airfield.

Parts were discovered during building development of the airfield - the previous
owner having the foresight to collect several pieces, saving them from being scrapped.

The exact aircraft identity is not certain, other than it was known to be a Heyford bomber.

At some point the pieces have been lightly cleaned and appear to have been
stabilised with a solution.

Both in very much in 'relic' condition, but very rare and unique.