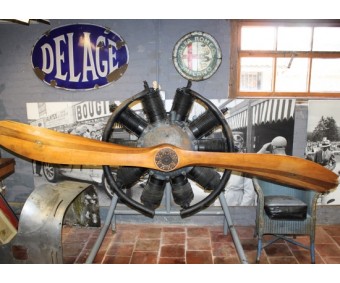 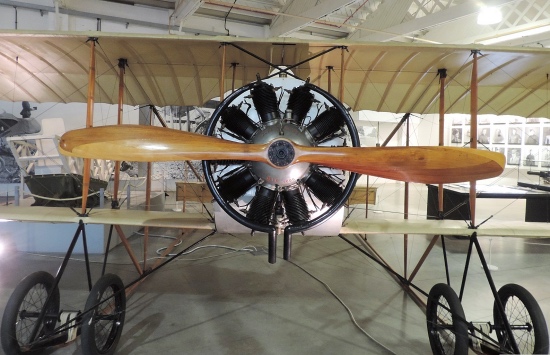 As fitted to the French Caudron G3 aircraft at the beginning of WW1.
Originally used for reconnaissance work they were built in fairly large
numbers, the British Royal Flying Corps and Royal Naval Air Service
both took delivery of the G3 as aircraft were in short supply at the
start of the war.
Occasionally fitted with machine guns and small bombs.

The engine is very advanced for its time, having the cylinders
arranged in a 'double row'; almost all engines at this point were
either large inline types or rotary designs.

Producing an acceptable 100hp it allowed the G3 to remain
in service for several years.

This example was manufactured in Italy - the original home of Anzani.
Engines were also produced under licence in Britain and France.

In original condition and very complete, both internally and externally,
although not run for many years. Two rocker arms are missing,
carburettor and magneto need to be sourced.

Also included for display  - an original period propeller of the type fitted to the aircraft,
and a correct Anzani operating handbook.

Very few of these engines exist outside of collections and museums making
this a unique oportunity.

Caudron G3 image with thanks to Marek Mincberger. Please click on above
image to view more of his excellent photographs.